CHECK THE FACTS, THEN DECIDE FOR YOURSELF IF NORTHWEST PUBLIC BROADCASTING GOT THE STORY ABOUT YAKIMA WATER RIGHT 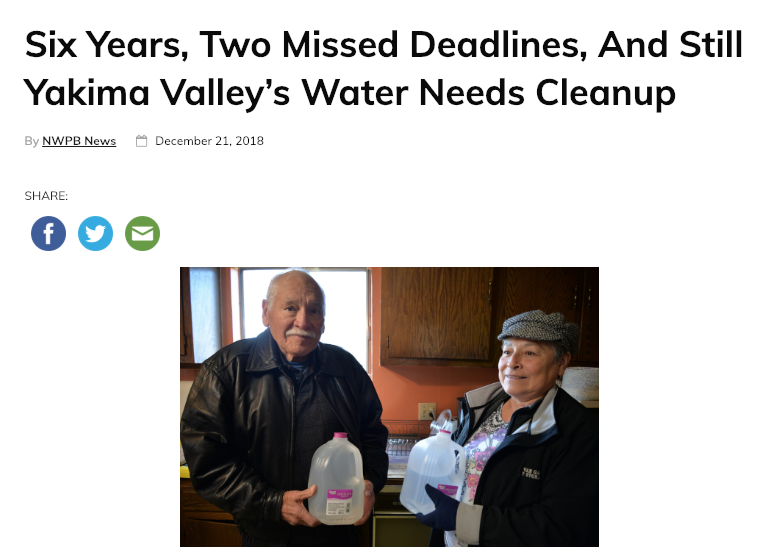 On December 21, 2018 Northwest Public Broadcasting broadcast this report on its NPB radio network and online news channel. We encourage you to read the online story and listen to the broadcast, then check it against the facts below:
www.nwpb.org/2018/12/21/six-years-two-missed-deadlines-and-still-yakima-valleys-water-needs-cleanup/

The Northwest Public Broadcasting report on the Yakima Valley Groundwater Management Area Committee was deeply disappointing. We believe Edward R. Murrow, the highly respected journalist, under whose name NPB operates, would be quite disappointed as well.

So, what is wrong with the story?

The story starts by explaining that an elderly Hispanic brother and sister who live near a large dairy have problems with their water. It stinks, it isn’t as cold as it used to be, and it has nitrates in it as well as other contaminants. So they buy bottled water instead of using their well. The first photo in the online edition shows the two holding bottles of water, the second has one of the victims in front of her house and the caption includes “this water stinks.” The third photo is of the activist in the community who has made a career of opposition to the dairy farms in the Valley. The fourth photo shows a package of bottled water. The last is of a large dairy farm.

A casual reader or scanner (or radio listener) will find the message unmistakable: Yakima water is bad forcing people who can ill afford it to pay for bottled water and it is the dairy farmers’ fault.

The secondary message, that the Groundwater Committee’s work has gone on six years and still isn’t getting the job done is also blamed on the dairy farmers. The report says: “The plan’s clean-up recommendations are voluntary. That’s a win for dairy owners, who say they don’t need more regulations. Environmentalists worry it could mean farmers won’t follow through.
Meanwhile, people are still without clean water.” And it quotes Jean Mendoza, the long time dairy critic and committee member:
“We really haven’t completed what we set out to do,” committee member Jean Mendoza said.

Let’s state a few facts that were readily available to these reporters but somehow never made it into the story:

The report states that nitrate, the primary water quality issue discussed, is odorless and colorless. The Groundwater Management Committee was tasked with dealing with water quality issues, but concerns about odor or water temperature never arose. We wonder why these would be considered so important to the reporters that they saw fit to start their story with complaints about these. Actually, the answer is obvious: the reporters wanted to connect the concerns of these residents about water to the fact that they live near a large dairy. This is guilt by inference which doesn’t belong in responsible journalism.

The delay experienced by the Groundwater Management Committee is almost entirely attributable to Mendoza and one other anti-dairy critic who participated with the clear intent to blame dairies regardless of the facts. However, a reader or listener would almost certainly conclude, as the reporters apparently have, that the six year foot dragging was due to dairy farmers.

The report states 20% of wells in the Yakima Valley are above EPA standards for nitrate without mentioning that this is actually less than the national average for farm country and less than most other areas in Southeast Washington without dairy farms. Nitrate in the soil and water is primarily related to farm practices that were changed by practice and law when it became known that excess nitrogen and heavy irrigation or rainfall could impact water quality.

The article does not mention that On-Site Sewage Systems are recognized by the EPA as a significant contributor to nitrate contamination of water. These systems are designed to leach nitrate to groundwater and failing systems contribute significantly. The density of OSS systems has a considerable impact according to the EPA which designates over 40 OSS per square mile as high density. Yet, some areas of the GWMA have over 180 per square mile. And in one area – Buena – when the County eliminated OSS by putting in a sewage system and then drilled a new well the nitrate issue went away.

The online report singles out what the reporters call “mega dairies” as the culprit, defining a mega dairy as over 700 cows. Whether or not a dairy contributes to water contamination has nothing to do with its size. All dairies are subject to the same stringent laws and regulations, which the reporters fail to mention are likely the most stringent in the nation. The law allows for zero discharge and enforcement action and penalties make it clear these laws are enforced. There is strong evidence throughout the state that these laws and regulations, combined with farmer environmental stewardship, are making a great difference in improving water quality, even reducing legacy nitrate left over from previous farm practices.

The report mentions an EPA study that points the finger at dairies, noting that the report was not included in the GWMA considerations. But the reporters failed to point out why it was not included. It has been fully established that this report failed every science test and does not even come close to identifying actual sources of nitrate contamination. Had the reporters investigated a bit more they would have found that the reason the report was not included is, in the words of the Yakima County Commissioners to the EPA: “We were optimistic and hopeful that the study would lay a strong scientific foundation for charting a course of action towards our mutual goal of reducing nitrate concentrations. Disappointingly, after our own review of the study and after careful consideration of comments made by individual and industry representatives along with local, state, and tribal entities, we do not believe that the study provides that strong scientific foundation…If the intent of the study is to draw a direct correlation to the dairy based upon sound scientific information, we believe it failed to do so simply because of the study’s stated limitations and questionable assumptions.”

The reporters state as a fact the health risks of nitrate in drinking water above the EPA limit: “Drinking water high in nitrates is not safe for adults and especially not for older adults or children.” Had the reporters researched this a bit, they would have found that the EPA concluded that there is no evidence of cancer risk or other reported risks of nitrate in water. There is no evidence of danger to children. While the EPA holds to the 10 parts per million limit (equivalent to one inch in sixteen miles when applied to length) because of the historic belief that it contributes to blue baby syndrome, the consensus of studies since the 1940s study that established that link shows it to be wrong. Blue baby syndrome affects newborns under two months of age and is now shown to be caused by a genetic condition which with bacteria generates internal nitrite. Nitrate, as the National Institute of Health makes clear in its promotion of the DASH diet, has been shown to contribute to heart health. Those adults drinking bottled water are doing so as a result of scare tactics promoted by activists and the reporters who spread their unwarranted fear. As the 10 ppm remains the EPA limit, farmers continue to do what they have for the past many years: work hard to eliminate any potentially negative impact to the environment.

Family farmers in the Yakima Valley and throughout Central Washington expect better from Northwest Public Broadcasting. A story such as this contributes to misunderstanding about our dairy farms based upon the intentional lies, distortions and persistent false accusations of a very small handful of anti-dairy activists. We call on NPB to set the record straight, do some genuine investigation and correct the misinformation carried in this story.