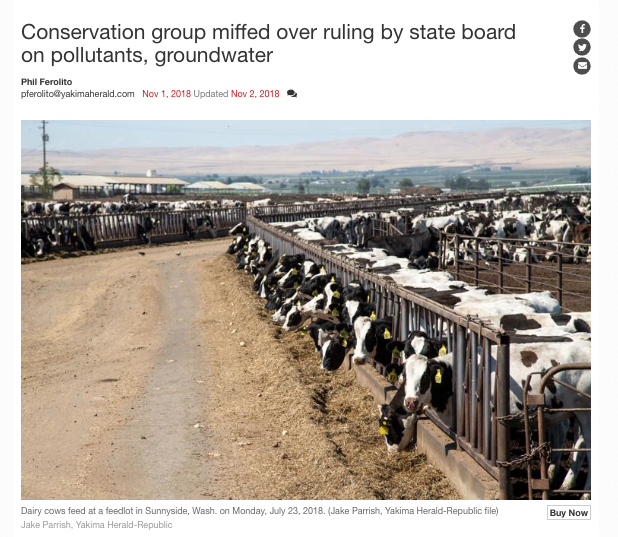 Dairy farmers in the Yakima Valley observe that the Yakima Herald continues to align with the very few loud anti-dairy activists against the interests of the community.

The latest example example is the November 1 article by Phil Ferolito on the recent ruling of the Pollution Control Hearings Board. This ruling, prompted by the litigation industry’s appeal of the Department of Ecology’s Concentrated Animal Feeding Operation permit, rejected every argument of the anti-dairy activists.

A more objective and responsible journalistic approach to this story would have a headline like this:

The story would have gone on to explain that the three members of the Hearings board were all lawyers and appointees of Governor Inslee. One was an environmental lawyer trained in Oregon where the anti-dairy litigation industry is headquartered. The purpose of the two week long hearing was to hear from the anti-dairy activists including Jean Mendoza and Helen Reddout, represented by Charlie Tebbutt, the Oregon lawyer who is leading the litigation industry’s efforts to end dairy farming in Washington state. Tebbutt and company argued that the Ecology permit did not protect against pollution and needed to have several very expensive requirements added. The Dairy Federation also appealed the permit in part because of the last minute change that Ecology made to the permit changing how lagoons are measured and thereby making a large number of existing lagoons non-compliant.

The Hearings Board rejected each and everyone of the arguments of the litigation industry, but accepted the requested change of the Dairy Federation to restore lagoon measurement to the national standard that has been proven to be protective of water.

There are several things about the Yakima Herald article that show the paper’s continuing anti-dairy bias.

1. Conservation group?
Really? Jean Mendoza with a very few other loud voices cannot be accurately called “conservationists.” While Yakima Valley farmland does not yet experience the same level of threat of suburbanization and urbanization as farmland in the Puget Sound region, real environmentalists and conservationists support the Puget Sound Partnership in calling for the preservation of farmland through supporting the economic viability of farmers. Farmland plays a critical role in environmental preservation by filtering rain water and providing habitat for wildlife. The anti-dairy activists may much prefer to see the acres of cropland replaced with homes but with them in the more rural areas come the on-site sewage or septic systems that are significant contributors to water quality problems. Conservations? No. Let’s call them what they are: anti-dairy activists who believe their righteous end justifies their repeated dishonesty and intentional disregard of the facts.

2. A regulatory break?
That’s how Mr. Ferolito interpreted the results. That is laughable. Ecology’s CAFO permit adds expensive and unnecessary burdens on dairy farms which are already by far the most regulated in the state. Actually, the nation. Our 1998 Dairy Nutrient Management Act specifies very clearly how water is to be protected through proper application of nutrients, inspections of facilities, etc. These regulations combined with responsible stewardship demonstrated by most farmers are effective. Not only are the current regulations (before the CAFO permit) effective in preventing pollution, but in at least one area in our state of dairy farms the water quality closest to dairy farms is improving while that closest to urban areas is not. What the litigation industry and the anti-dairy activists wanted was to pile on a lot more unnecessary regulations despite knowing that the cost of those would result in the loss of most of our remaining 370-some dairies in the state.

3. Who is quoted?
Who is given the front page of the Yakima Herald to continue to spew unfounded accusations against dairy farmers? The reporter states a representative from the Dairy Federation was not available for comment. We wonder how hard the reporter tried to talk to a local dairy farmer or other farm groups involved, such as Yakima Family Farmers? We did not get a call. Nor did any local dairy farmer as far as we know. This is not unusual. Looking back on the paper’s coverage of the industry, the ink given to the very few and very loud activists far outweighs the voices of the farmers, community leaders or the public which understands that farming –– including dairy farming –– is the life blood of our community.

4. Where are the important details?
In his eagerness to show “Conservationist” Mendoza’s displeasure with the ruling, Mr. Ferolito glosses over the significant information. The primary pitch of Mr. Tebbutt representing Puget Soundkeeper Alliance and Mendoza’s group among others is that manure lagoons need to have double synthetic liners with leak detection. This is what the EPA, using the falsified 2012-2103 Nitrate Study, required of the farms signing their Order. But even Mr. Tebbutt’s primary expert witness, David Erickson, in the hearing agreed that EPA’s requirement was not justified by the science. What the Hearings Board found is what dairy farmers have been saying all along: the lagoons built according to the standards of the USDA’s Natural Resources Conservation Service (NRCS) have been proven to be protective of water. In fact, when Ecology tried to impose a more rigorous lagoon standard by changing the way the bottom is measured, the Hearings Board “remanded” Ecology to use the NRCS measurement because, again, it is shown to be protective and they are the real experts.

The article mentions Mendoza’s concern about groundwater testing. Why did the reporter not refer back to the hearing transcript where Ecology carefully explained why groundwater testing would be of very limited value and why existing soil testing is sufficient in protecting against nutrients leaching into groundwater? These are very important issues to our dairy farmers and a little more work on the part of the reporter would be helpful in getting the facts out. It’s easy to quote the “conservationist,” but that does not necessarily reflect the facts.

We could go on. We could refer back to the Yakima Herald’s editorial on the draft GWMA report where their primary concern was that the draft did not place sufficient blame on dairy farms. We could point to the whole series of articles that continually refer to the EPA Nitrate Study despite our pointing out to them and publicly why every legitimate scientist and expert who analyzed the study concluded it was not only false but suggested it was intentionally false, or falsified. When is the Herald going to come to grips with the fact that this study is bogus? We could point all the way back to the 2008 series “Hidden Wells, Dirty Water” which first put the black hat on dairy farmers, falsely accusing them of being the primary source of groundwater issues. We could point out their refusal to set the record straight on nitrate and public health.

When a major news outlet in a community has committed to on-going support of a damaging few against the interests of good people and the community they serve, what are the rest to do?