WHY MENDOZA AND DYJAK ARE SO WRONG ABOUT SEPTICS AND LAGOONS 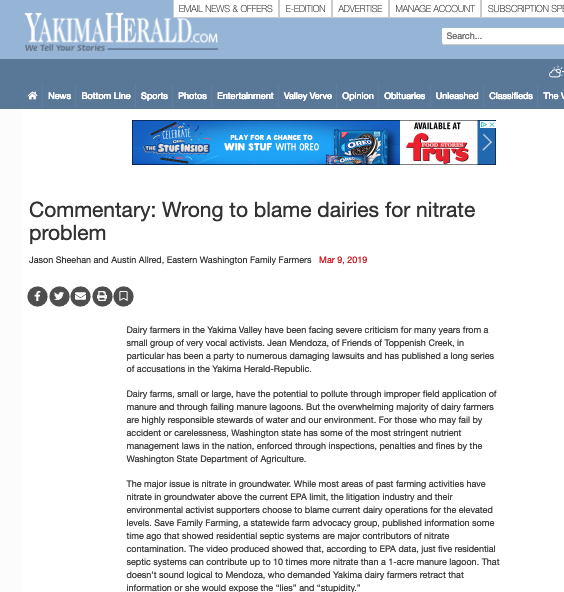 The guest editorial published in the March 9 edition of the Yakima Herald prompted a loud response from anti-dairy activists Jean Mendoza and Jim Dyjak.

Both have complained to the Yakima Herald for publishing what they consider to be “lies” as Mendoza has commented earlier.

Clearly, neither Mendoza or Dyjak are aware of the vast differences between septic systems and manure lagoons, nor the science behind the nitrate contamination leaching from these two very different systems.

We explained in great detail the science behind the claims we made in comparing the nitrate contamination from OSS vs. lagoons. We wish they had taken time to read this document on our website. If they had they would realize the following key facts:

1. Septic systems are designed to leach nitrate to soil and groundwater–they aren’t working good if they don’t!

2. Manure lagoons are designed to hold the nutrients, not release them and if designed according to federal guidelines established studies show they do a good job of preventing contamination.

3. Human waste and animal manure contain nitrogen which converts to various forms. It’s this conversion that helps explains the vast difference in contamination.

4. Mendoza and Dyjak want to compare the volume of material in the septic vs. the volume in the lagoon. That makes no sense scientifically. It’s a bit like looking at a smoke stack in an industrial facility. One stack might be spewing huge quantities of noxious chemicals and the other emitting water vapor as steam. From a distance they may both look like they are polluting, but one is and the other is not.
​
5. Nitrate is what plants need to grow but is also what contaminates groundwater if too much leaches. Nitrogen converts to nitrate when exposed to oxygen, water and microbes. Septic systems are designed to enable this conversion. The nitrogen in various forms in the lagoon does not convert until it is applied to fields to grow crops. The small amount of nitrate that may leach from the lagoon is converted back to other forms of nitrogen as it passes through the lagoon liner. That’s why there is such a major difference between what leaches from septic systems and what leaches from lagoons.

6. Credibility and science matter. We strongly encourage Mendoza and Dyjak to take a deep breath, spend some time as farmers have to study the science of nitrogen conversion before commenting further or criticizing the information we have provided. Refusing to do so will only demonstrate that they are not willing to allow the facts to dissuade them from their fixed anti-dairy position.

Dear Mr. Crider & Mr. McManis,
As you are well aware the Lower Yakima Valley Groundwater Management Area (GWMA) has spent the last six years studying the problem of groundwater pollution in the Lower Yakima Valley. After much research and debate the GWMA Draft Final Report provided this estimate of the relative contributions from potential sources.

See Lower Yakima Valley Groundwater Management Program, page 20, available at http://www.yakimacounty.us/DocumentCenter/View/18948/GWMA-Volume-I-Clean
With this in mind it was shocking to read a guest editorial in this Sunday’s Yakima Herald Republic in which one member of the GWMA advisory committee, Jason Sheehan, states:
. . . according to EPA data, just five residential septic systems can contribute up to 10 times more nitrate than a 1-acre manure lagoon
and
More likely, just five residential septic systems, or Onsite Sewage Systems (OSS) may contribute 20 to 30 times more than a one acre manure lagoon . . . .
I do not expect that any thinking person will believe these outlandish assertions, but I wonder why the Yakima Herald Republic would publish them in the first place. Many, many Yakima Valley residents rely heavily on your newspaper for accurate information. Please print a clarification before the Tuesday, March 12, informational GWMA meeting.
Sincerely,
Jean Mendoza

The Yakima Herald needs to do fact checking before printing so called facts.
In the 3rd paragraph Jason Sheen states five (5) residential septic systems can contribute up to ten (10) times more nitrate then a one (1) acre manure lagoon.

Also the average septic tank is pumped out once (1) every four (4) to Five (5) years. A settling pond and lagoon is empty on to fields at least once (1) or more every year.

Also being a member of the GWMA for six (6) I have asked industry repeatedly for the documentation showing septic systems put out more nitrates then manure lagoons when they bring up the subject. As of today more than six (6) years later they have yet provided any documentation of fact to the GWMA .

In the last paragraph Jason says they will publish a series of messages that directly address complaints against dairies. If the Yakima Herald is going to be the conduit for these messages you need to FACT CHECK them for correctness.