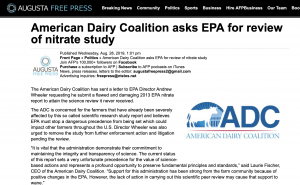 As the story becomes more widely known, farmers and farm groups from across the nation are calling on EPA Administrator Andrew Wheeler to take action. News outlets are bringing this story to farmers and citizens concerned about the lack of accountability being shown by EPA staff and leaders.

On August 28, the American Dairy Council sent a letter to Administrator Wheeler, joining with Rep. Dan Newhouse, in calling for a review of the 2012-2013 Yakima Nitrate Report. This action is being carried by radio networks across the mid-west (report to be posted when available) and by news outlets across the country. Augusta Free Press in West Virginia is one to carry this story.

The ADC letter to Wheeler states: “This report, proven false by fifteen national agricultural science experts, was developed without the peer-review required on “influential science information” as the study was categorized. When approached about the error, staff attempted to conceal the failing by falsely claiming the report was not categorized as ‘influential’, but ‘other’, allowing for full discretion in peer reviews.”

Laurie Fisher, CEO of ADC said: “Support for this administration has been strong from the farm community because of positive changes in the EPA. However, the lack of action in carrying out this scientific peer review may cause that support to wane.”

This is a very important statement from a national farm leader as we head into campaign season.